5 Things to Know About the Housing Market in Winter
November 4, 2022

5 Things to Know About the Housing Market in Winter

When it comes to moving season, most people think of late spring or summer. And rightfully so — the kids are out of school, the weather is mild, and it’s a great time to think about the next step in the housing journey (without the fear of rain on moving day!). True, the peak months are typically May through August with significant slowing November through February, but that doesn’t mean the housing market is non-existent in the winter months.

Buying or selling a home in the winter has distinct advantages. For many, the idea of moving in winter is less-than-appealing. This may be true in snow-laden parts of the country such as the northeast, but out west, this is much less of a concern. Many parents are hesitant to move during the school year, as they don’t want the disruption to impact their child’s schooling. But many schools are closed for the holidays in the off-season, so unless your child would be switching schools, this disruption can be strategically planned. Following are five other things to know about the housing market in winter.

Buyers looking for a home in the winter months will find there’s far less competition in the spring or summer. This means they’ll be less likely to be outbid, which in turn means they will avoid overly inflated prices. Less demand equals lower prices, a win-win for buyers, and there’s often less pressure to put in an offer. But it can also be beneficial to sellers as well; less inventory means buyers have fewer options, making them more motivated to offer at or above asking price.

Buyers and Sellers are Motivated

Buyers who list in the winter and buyers who house-hunt in the winter are far more motivated to make a deal. It’s no secret the market slows during this time, so in general, those who enter it do so because they have to. Perhaps they’ve received a job offer, or need to move closer to an ailing family member, or maybe their family is growing exponentially and they’re bursting at the seams. Whatever the reason, these are not casual buyers or sellers — they are serious about getting the deal finalized. 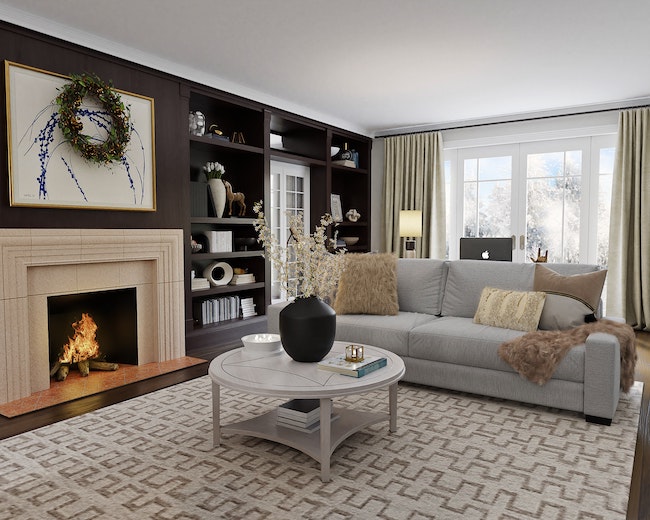 Although buyers may be drawn in by swimming pools and backyard decks in the summer, many homes simply show better in the winter. Crackling fireplaces, holiday decorations and flickering candles set a cozy vibe, which is appealing to many buyers. Plus, there’s less emphasis on landscaping and curb appeal. Rather, a few holiday wreaths and even some twinkling lights is all it takes to impress potential buyers.

Let’s face it — buying or selling a home comes with a certain degree of stress. But doing so in the off season means you often avoid bidding wars. It also means all the professionals involved in the sale — agents, loan officers, lenders, inspectors and insurance agents — have more time to focus on you.

Forget moving on a Tuesday night because all the Saturday morning slots are already booked. With fewer people moving in the winter, it’s easier to hire movers on the prime weekend days, and it usually costs less too. You may run the risk of rain, but professional movers know how to deal with the weather. And in the greater Sacramento area, snow is never a threat.

Although the housing market in winter has its own unique set of pros and cons, there are many benefits to both buying and selling in the off season. Less competition and highly motivated buyers and sellers mean the winter might be the right time for you, without the stress involved in the competitive spring and summer season.