The Best No-Cook Meals for Summer

It’s no secret that the greater Sacramento area gets HOT come summer. Although warm summer nights are one of the perks of living here, cooking meals (especially in the oven!) is usually a no-no on the hottest days. Some people prefer to eat their meals later in the evening, once the sun goes down, while others prefer not to cook at all. And on those days when grilling outdoors isn’t possible, sometimes a no-cook meal is the best option.

When it comes to no-cook meals, salads are the obvious choice. They’re light, refreshing, and nutritious. But there are plenty of other ways to feed your family without heating up the whole house. Think pre-cooked meats, vegetarian dishes — even sushi. So, save those pot pies and lasagnas for the winter, and check out our roundup of the best no-cook meals for summer. 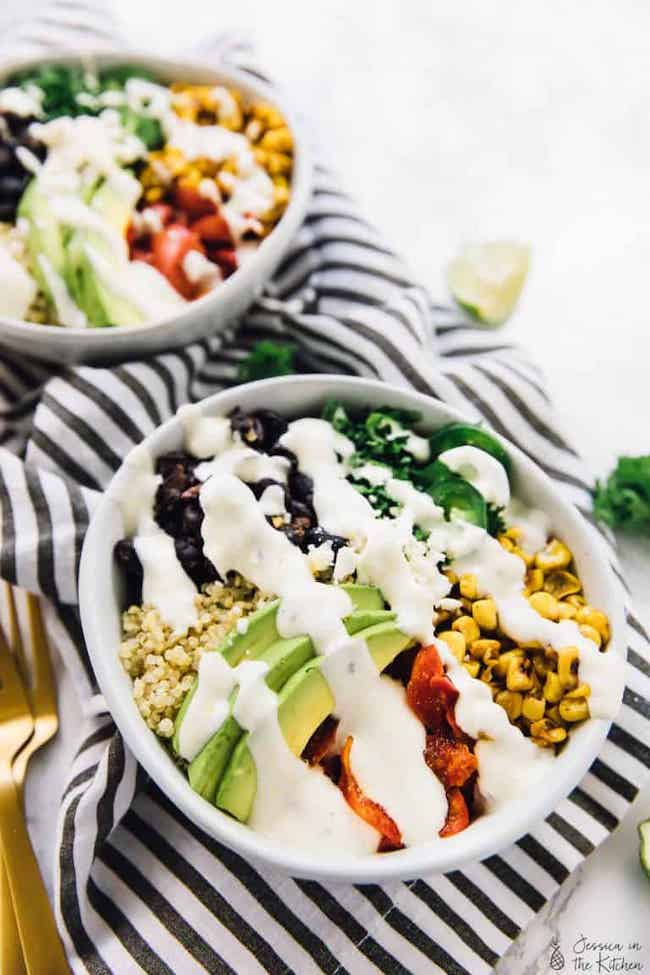 Photo courtesy Jessica in the Kitchen

If you’ve never had elote, or Mexican street corn, you’re in for a treat. The traditional version consists of spiced corn on the cob, covered in mayo and cheese. This recipe takes it to a whole new level, using corn off  the cob, black beans, and pre-cooked quinoa for a healthy, flavorful meal. 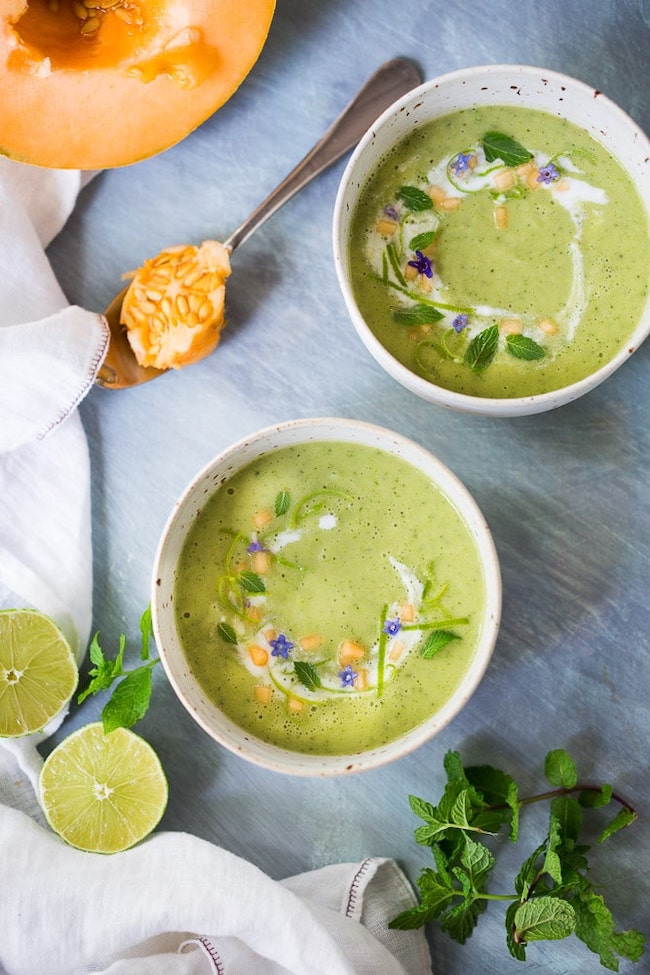 Nothing says summer like melon and cucumber, and this recipe combines the two for a refreshing chilled soup. It uses cantaloupe, but you could use whatever melon you prefer, pureed with cucumber and herbs for a tasty hot-weather treat. 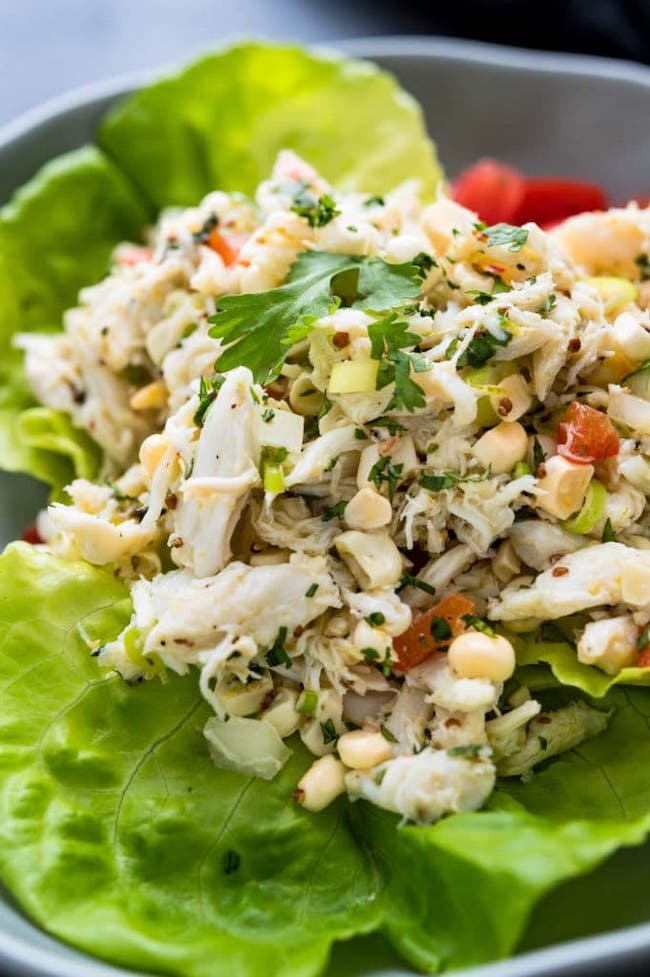 What’s better than sweet crabmeat in the summer? Crab salad! Mixed with corn, red bell pepper and a tangy citrus dressing, this recipe is summer in a bowl. Or summer in an avocado or a hollowed-out tomato, which make for an impressive, tasty appetizer. 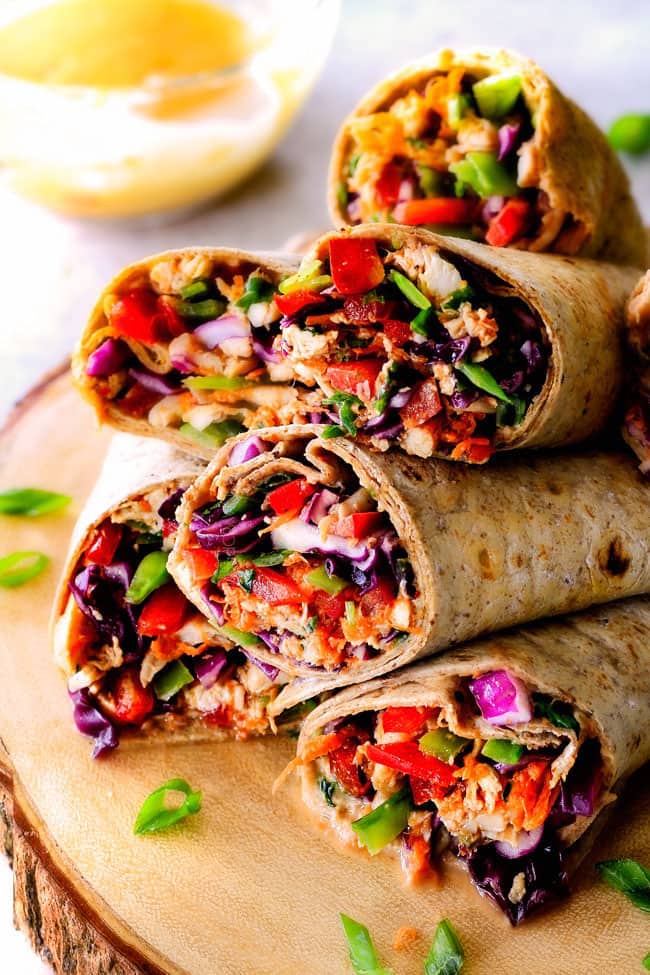 With its tangy-sweet dressing, Chinese chicken salad is a popular summer dish. But stuffed into a multi-grain flatbread, and you have a healthy, hand-held version. This recipe uses a punchy dressing as a marinade for shredded rotisserie chicken, plus a spicy Asian chili mayo. 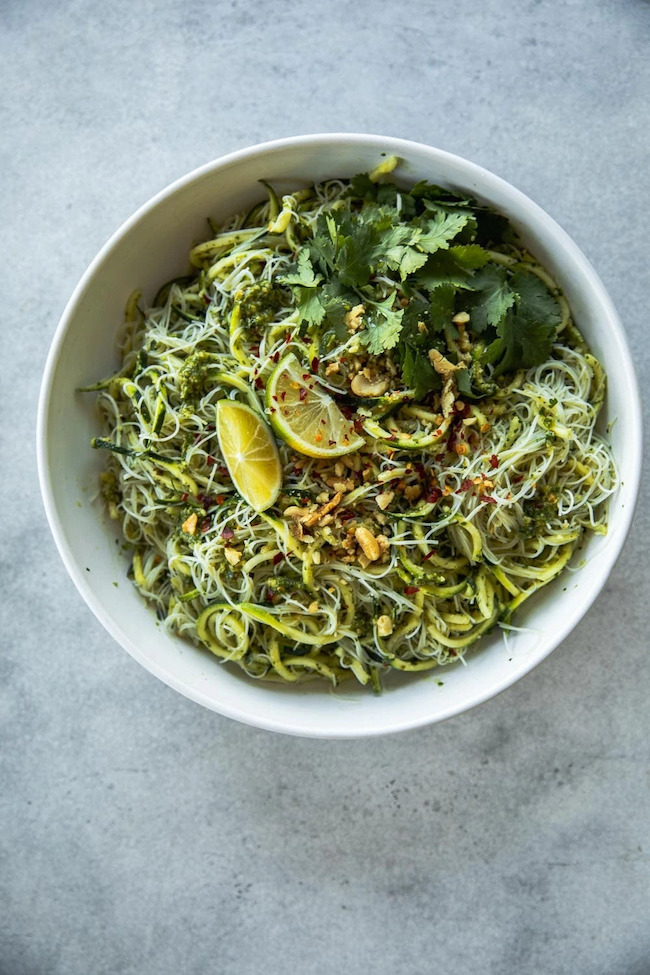 Healthy, refreshing and satisfying — this recipe has it all. Its base is spiralized zucchini and rice noodles, which are softened in hot water. Tossed with a bright, herby pesto made from cilantro and peanuts, it mimics the flavors of popular Thai dishes. 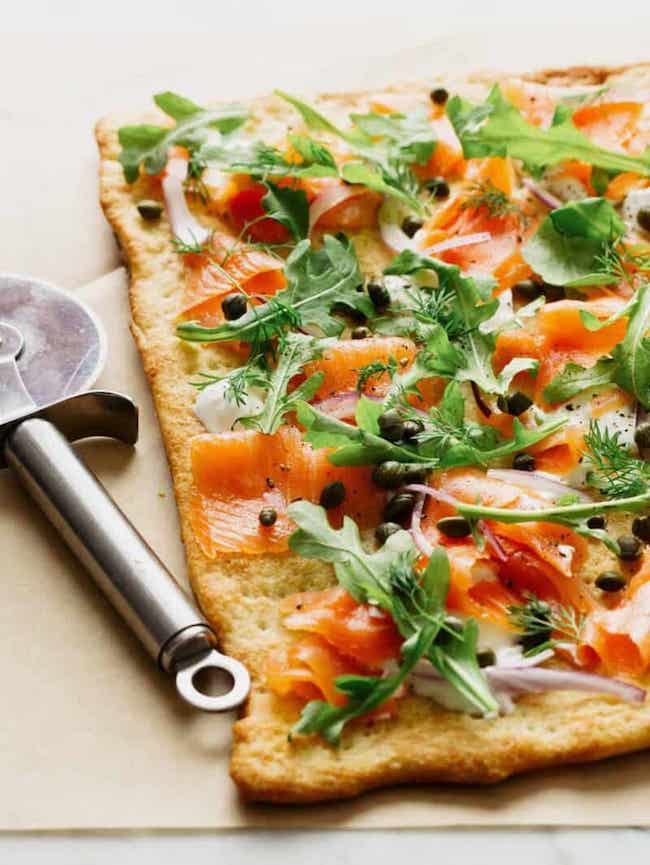 Although pizza, naturally, has to be baked, this recipe can be easily adapted by using a pre-cooked, store-bought crust. It’s topped with smoked salmon, crème fraiche, onions, capers, dill and arugula, ensuring a punch of flavor in every bite. 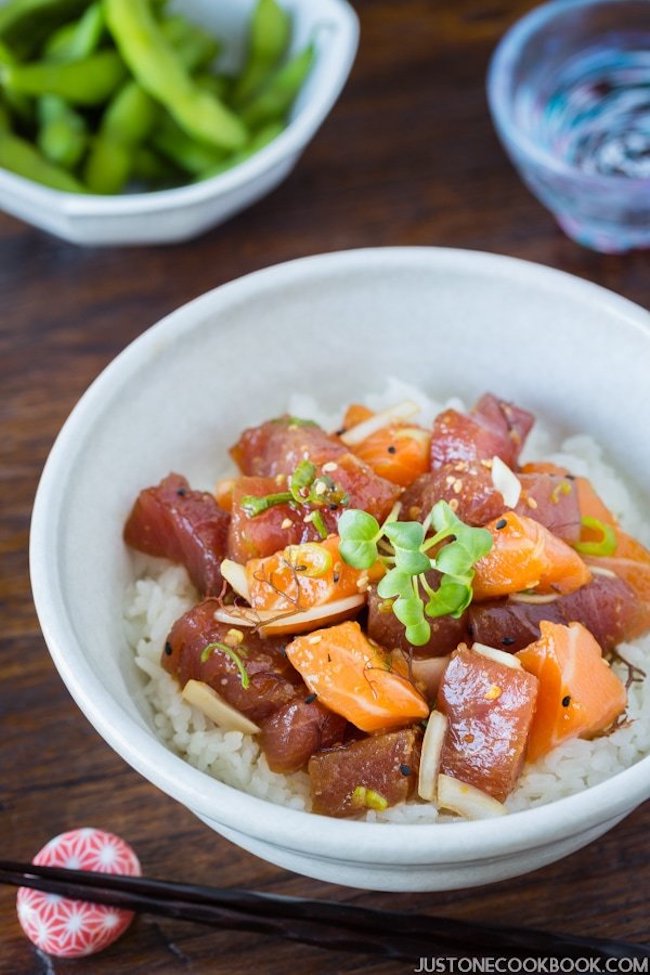 With its tender chunks of fish and flavorful ponzu-based sauce, this recipe is sure to be a summertime hit. You can pick up sashimi-grade tuna or salmon at any of the Asian grocery stores around town, and set up a “bowl buffet” with toppings like avocado, cucumbers, edamame and seaweed. Full disclosure: the base is made from sushi rice, so it *technically* isn’t no-cook, but we’ll let it slide. 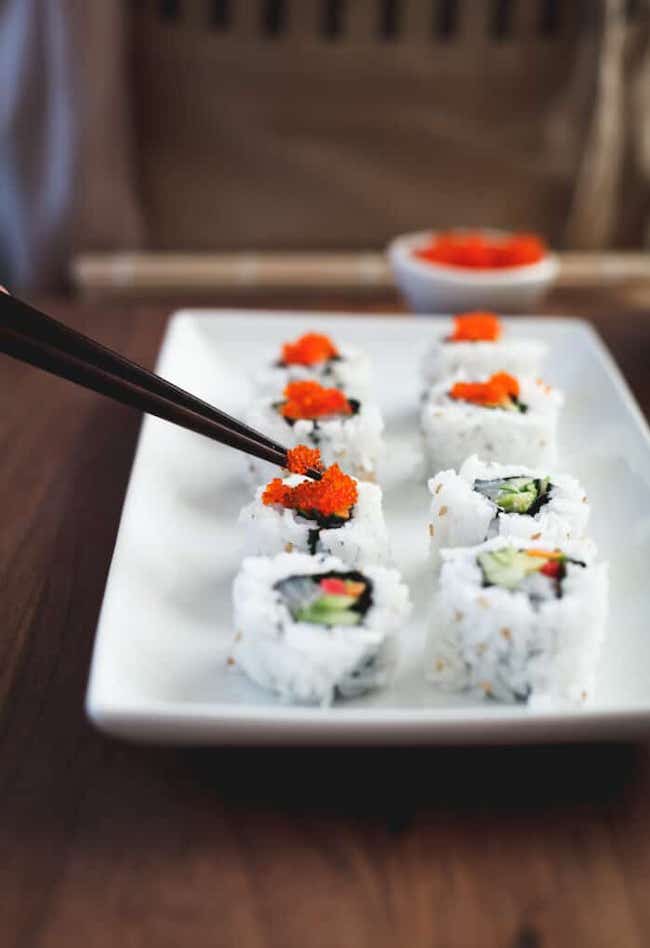 Have leftover ingredients from your poke bowls? Why not try your hand at making sushi rolls at home? This recipe includes a handy video tutorial with everything you need to know on how to roll. Stuffed with fish, cucumber and avocado and topped with roe, it’s just like the restaurant version — only more fun.

These colorful rainbow rolls aren’t just pretty, they’re also healthy. They are gluten-free, meat-free, and are said to be detoxing as well. You just roll up whatever veggies you prefer, like carrots, cucumbers and cabbage, top with hummus or chickpeas for a bit of protein, and wrap in a lettuce leaf. Dipped in a spicy-sweet peanut sauce, they’re a great way to cool off on a hot summer day. 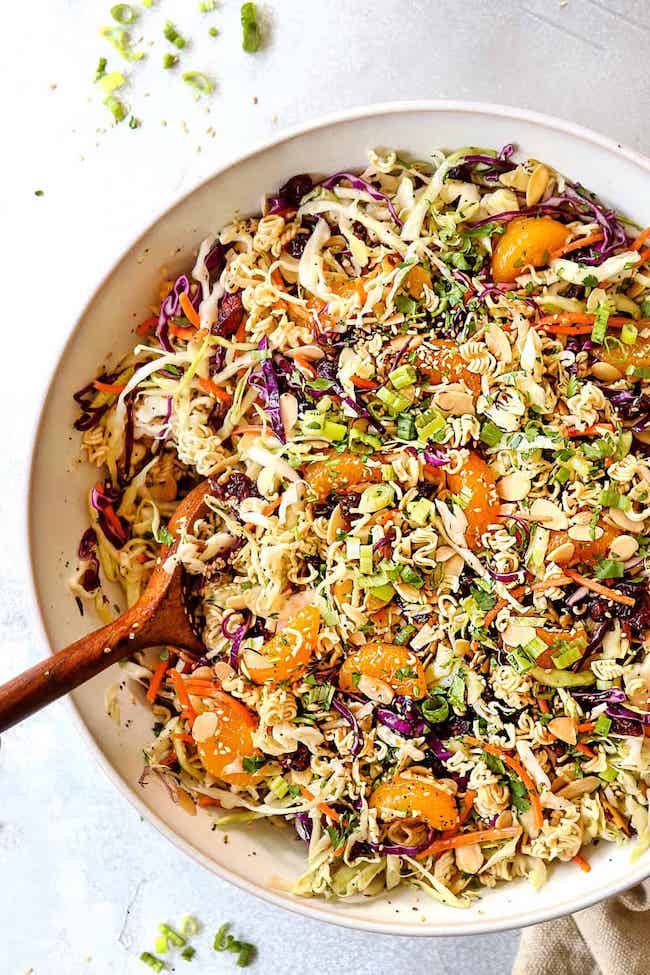 This recipe is a throwback to a classic dish that mimics the flavors of a Chinese chicken salad, but with more crunch. You toss dried ramen noodles with toasted almonds, mandarin oranges, cabbage and a sweet-tangy-gingery-garlicky dressing, and you have a filling meal that won’t make you break a sweat. 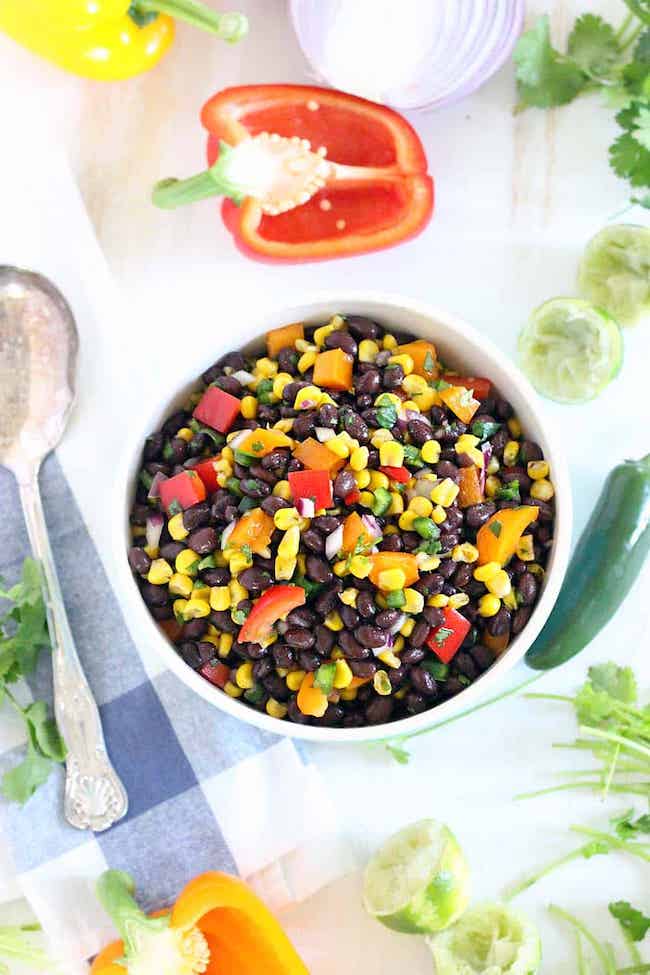 Similar to the Mexican elote salad, this recipe can be used as a base for whatever you throw its way. Although this version is vegan, with black beans, corn and bell peppers, you can easily kick it up a notch by adding pre-cooked chicken, beef or shrimp. You can also adjust the heat by adding more jalapeños or chipotle peppers, and toss in whatever veggies you have on hand. The possibilities are endless! 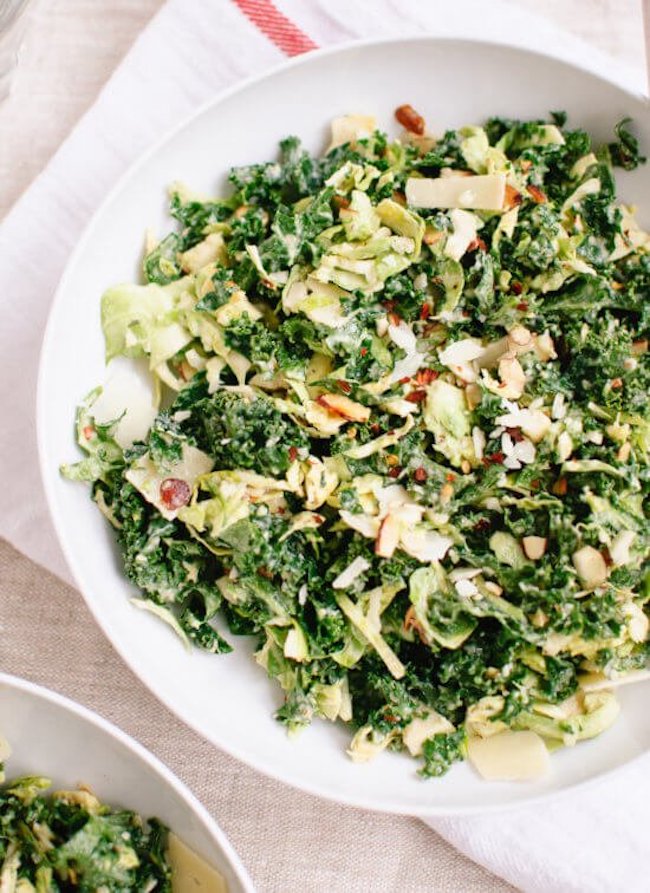 If you haven’t yet jumped on the kale bandwagon, now is a good time to get on board. This raw kale salad is made up of shredded kale and Brussel sprouts, with a vibrant dressing made from tahini and maple syrup. Parmesan adds a salty bite, and sliced almonds add crunch. 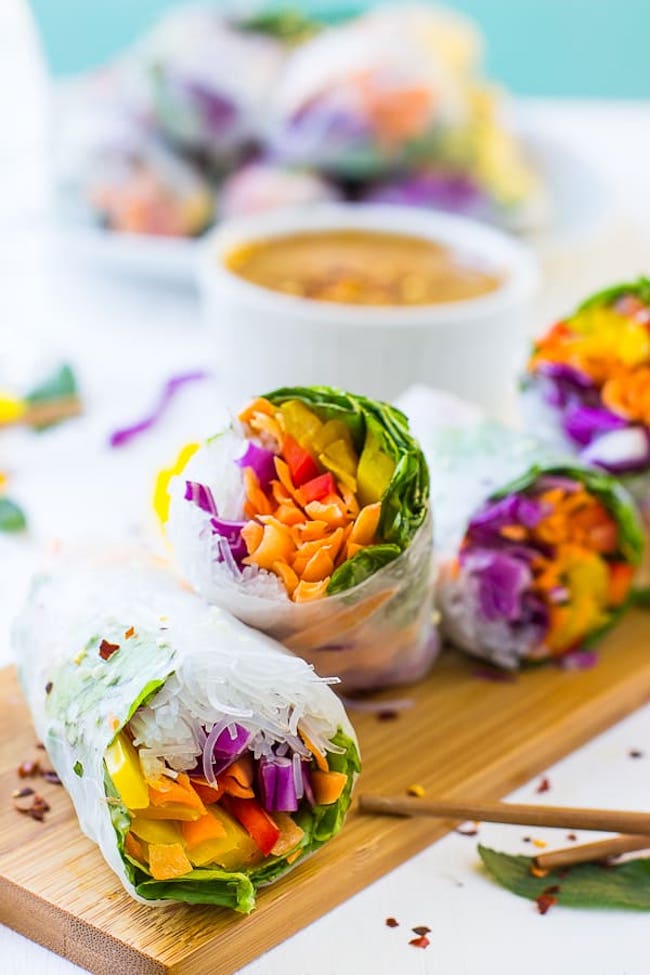 Photo courtesy Jessica in the Kitchen

Like the rainbow rolls, these vegan fresh spring rolls incorporate julienned veggies and peanut sauce. But instead of a lettuce wrap, they use rice paper softened in water, along with rice noodles. You can also add tofu for a protein boost, or cooked shrimp or chicken for a non-vegan version.