The Best Spots to Get Hot Chicken in the Sacramento Area
January 15, 2021

The Best Spots to Get Hot Chicken in the Sacramento Area

It may be cold outside, but the Sacramento dining scene is hot! Hot chicken, that is! And we’re not talking the Buffalo-born kind, dunked in blue cheese with celery sticks. We’re talking Nashville-style hot chicken: marinated, breaded and fried chicken dusted with a cayenne-based spice blend. It’s often served with white bread and pickles, or scrunched in a sandwich with slaw, pickles and a spicy sauce.

So how did Nashville Hot Chicken become a thing? Legend has it that it was born of revenge. During the Great Depression, Thorton Prince, a known ladies’ man, came home after a night out. His girlfriend became jealous, and to exact revenge, she smothered his favorite dish — fried chicken — in obscene amounts of pepper and spices. But he loved it, and ended up developing his own recipe and opening his own chicken shack, which is still in operation to this day.

Since that time, hot chicken has become a signature dish in Nashville, with dozens of restaurants specializing in the fiery bird. It’s only recently made its way to Sacramento, but already it’s gained a stronghold. Following are some of the top spots to find hot chicken in the greater Sacramento area:

Having started as a food truck, Nash & Proper already had quite the following when they opened their brick-and-mortar restaurant downtown. Their trucks still show up at pop-up events, but much of their business takes place at their K Street location. The menu is pretty simple: crispy fried chicken in wing, tender or sandwich form with your choice of heat, ranging from “naked” to “cluckin’ hot.” Sides like mac n cheese and potato salad are also available. 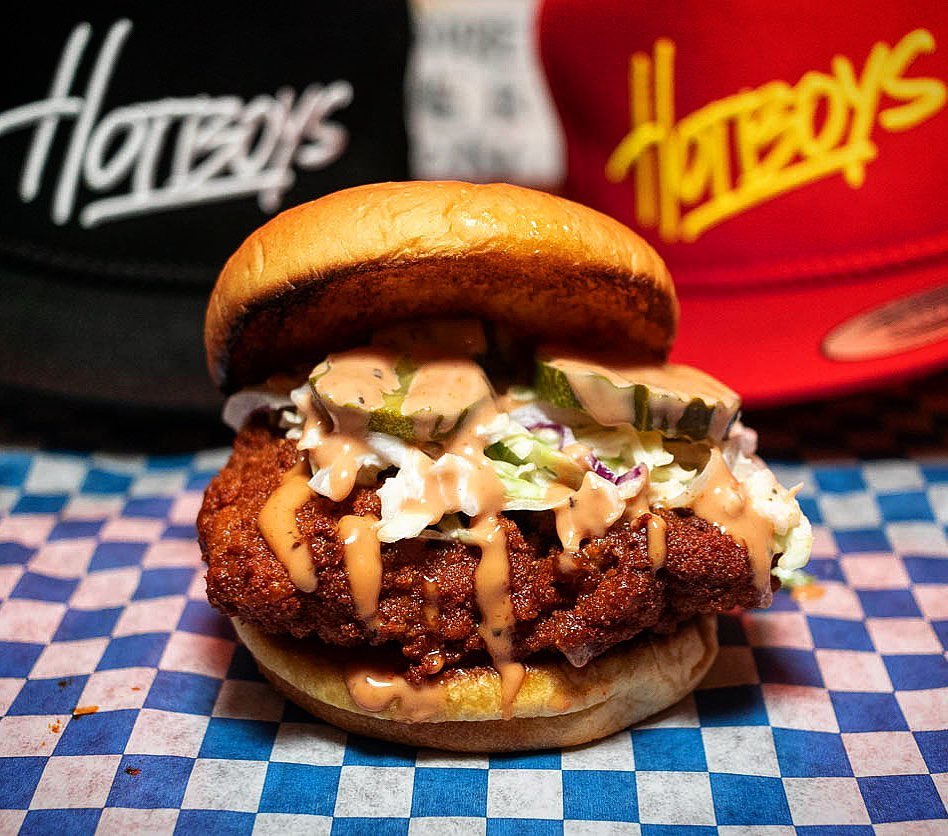 The midtown outpost of this popular Oakland chicken shop is hard to miss — it’s illuminated with bright neon signage and colorful graffiti art. The menu has tenders, wings, bone-in chicken and of course, sandwiches, in varying degrees of heat. You can also get loaded fries, mac n cheese and an ice-cold beer. Oh, and while you’re at it, you can also donate directly to a fund that helps feed first responders.

If the need for heat strikes and you’re in the Citrus Heights area, check out The Angry Bird. This no-frills joint has chicken in a range of heat levels, from no heat to “Call 911” and “Sign a Waiver.” You can have it served up in slider form, over white bread, even over fries or buttery rice, complete with slaw and pickles, and all doused with their secret spicy sauce.

Located inside Goldfield Trading Post in midtown, this Southern-inspired kitchen specializes in all forms of hot chicken. In addition to the classic hot chicken sandwich, you can also get a hot chicken taco, a hot chicken waffle, a hot chicken salad and hot chicken fries. Of course, you choose your level of spice and can add sides like fried pickles or mac & cheese. 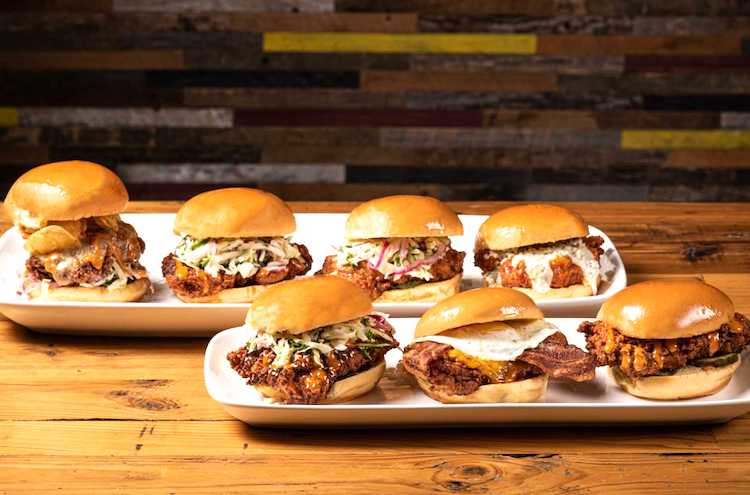 Although this laid-back chicken shop only has brick-and-mortar locations in the East Bay, they do have a “ghost” location in Sacramento, where their food is available for delivery or pickup from their sister restaurant, Sauced, downtown. The menu has all types of fried chicken sandwiches, including the “Naughty Nash,” which has hot pepper oil and jalapeño slaw and the “Flaming Mo,” with ghost pepper cheese and pickled jalapeño. There are also fried chicken tacos, veggie chicken tenders, loaded waffle fries and for dessert, apple hand pies.

From the same folks that brought us Urban Roots Brewing & Smokehouse comes BAWK!, a chill downtown spot for all things chicken. While their specialty is traditional fried chicken, they also serve a hot chicken sandwich topped with hot sauce mayo, pickles and slaw. You can also get Nashville chicken nuggets or, for vegetarians, cauliflower bites. 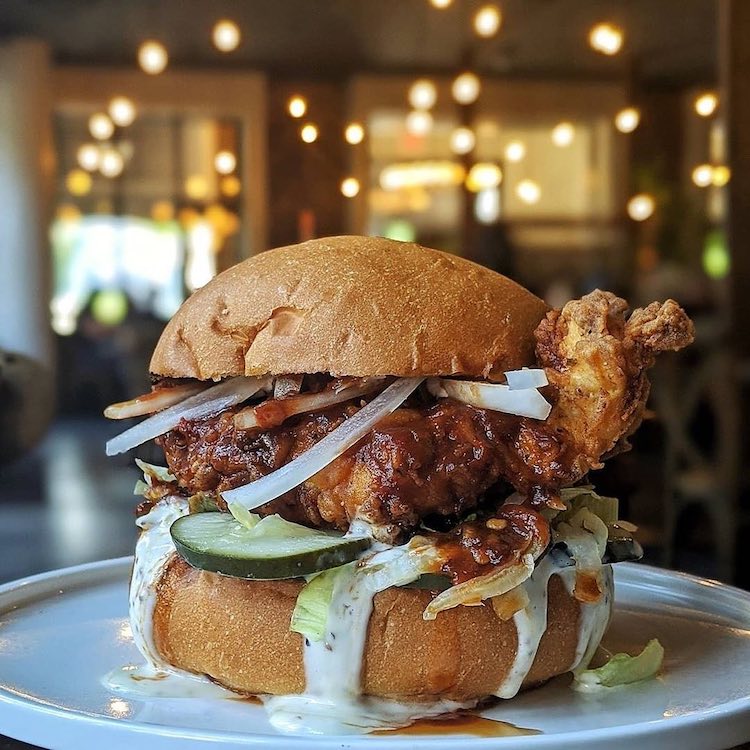 This fun, quirky chicken shop in El Dorado Hills is known for its southern-inspired menu, including fried chicken sandwiches. Choices range from the sweet (“The Bee’s Knees” has honey mustard) to the spicy (“Fire in the Hole” has ghost pepper aioli, habanero relish and hot sauce). Wings, chicken nuggets, burgers and a surprisingly large selection of sparkling wine and champagne is also available.

Located in Rocklin, this Southern California chain specializes in down-home barbecue, but they also offer another southern staple: Nashville Hot Chicken. In fact, their Nashville hot chicken dinner is one of their specialties, featuring buttermilk-soaked crispy fried chicken doused in a fiery hot sauce. It’s served with sweet pickles and a tangy Alabama white BBQ sauce, as well as your choice of sides like braised greens, BBQ beans or watermelon slices. It also comes in sandwich form!

Fixins is a soul food spot in Oak Park that is renowned for its traditional dishes like fried catfish, gumbo and shrimp and grits. But we’d be remiss not to include them in our list of hot chicken spots, as their hot chicken sandwich is one of the best in town. It features fried chicken in a secret sauce, with chipotle mayo and house-made pickles. Wash it down with a sweet tea or lemonade and you’ve got it made in the shade.