NOTE: This post was updated on September 27, 2018 to reflect current information for the 2018 season.

Without a doubt, the community of Apple Hill Farms is the most popular destination near Sacramento during the fall. Over the decades, the harvest season has exploded thanks to more than 25 family-run farms who all celebrate with apple picking, berry picking, pumpkin patches and kid-friendly fun. For details on the wineries, farms and activities in the region, check out Your Guide to Apple Hill Farms During the Fall.

Then, get ready for a sweet treat! Outside of horse rides, apple orchards and scenic picnics, the biggest draw to Apple Hill is the annual opening of its mouth-watering bake shops. Each one celebrates the spoils of harvest season with fresh, warm, festive apple treats — from fruity pies to the famed apple cider donut. Get your fill while the fruits are fresh and the shops are open!

The best bake shops in Apple Hill Farms include:

Abel’s Apple Acres is a famous destination in Apple Hill — and not just because of the maze, the horse and pony rides, and the always popular craft fair. This four generation family ranch makes some of the region’s favorite pies, strudels, fritters and warm apple donuts. Trust us, you’ll eat more than one donut and you’ll probably take a frozen pie home to bake yourself, too.

Grandpa’s Cellar is a hidden gem amongst the dozens of farms in Apple Hill. From Labor Day through mid-December, you can pick 12 different kinds of apples in the orchard or choose from the most extensive array of fresh apple pastries — from Caramel Apple Pie to the famed Apple Hill Cake. 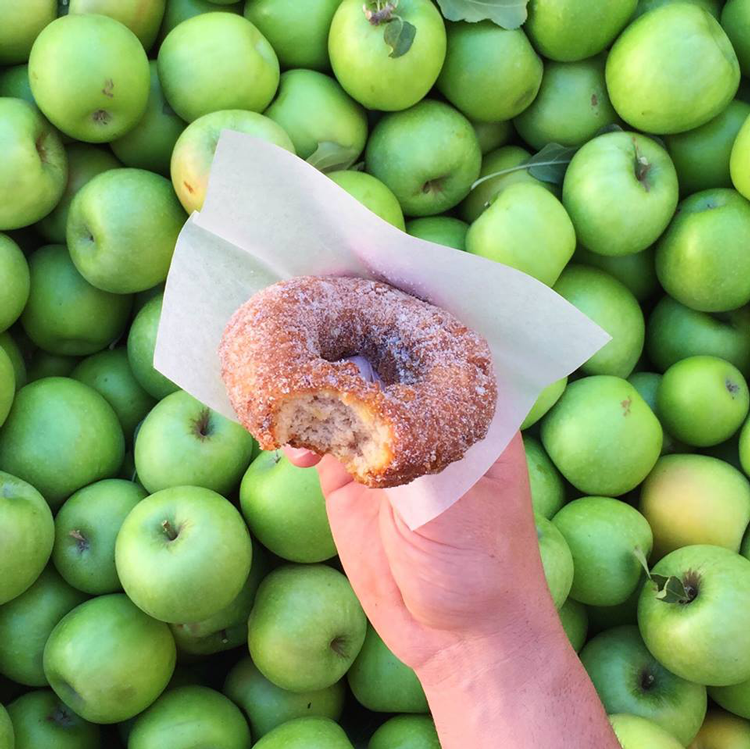 Boa Vista’s bake shop is home to the most famous apple donuts in the region — and you can get them year-round. Unlike many other community farms, this historic spot doesn’t close when harvest season is over. They offer hard ciders, non-alcoholic ciders, a farm market, wine tastings and their newest attraction: the apple donut ice cream sandwich!

Formerly Kids Inc., Delfino Farms is still owned by the Delfino family and their bake shop, Joan’s Apple Bakery, is still cranking out the same, fresh, mouth-watering pies! Since 1964, they’ve been a favorite stop on the Apple Hill map for family-friendly activities. Their signature bakery creation comes from the kitchen of the original Joan “Nanny” Delfino: the Walkin’ Pie is a mini pie that skips the plate and fork so you can carry it with you as you explore the grounds. Don’t forget to pick up a famous Henrietta Stich Hard Apple Cider while you’re there! 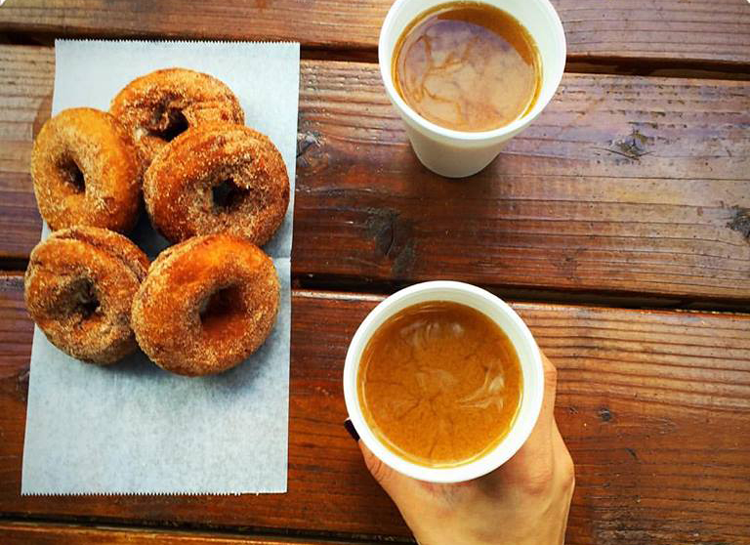 When you’re looking through reviews of Apple Ridge Farms, you won’t be able to miss the hundreds of mentions of their famed apple cider donuts. Glazed, sugar-coated or plain — feel free to have one of each. Or better yet, order the Apple Sundae to split with the entire family! It consists of an apple cider donut topped with vanilla ice cream, whipped cream, peanuts and caramel sauce.

The apple cider donuts at Rainbow Orchards are made fresh right before your eyes. Watch as the fried treats come out piping hot, see them dusted with cinnamon sugar, then get ready for a soft and densely chewy treat you’ll come back for again and again. As a bonus, eat your treat with Rainbow Orchards’ fresh cider! 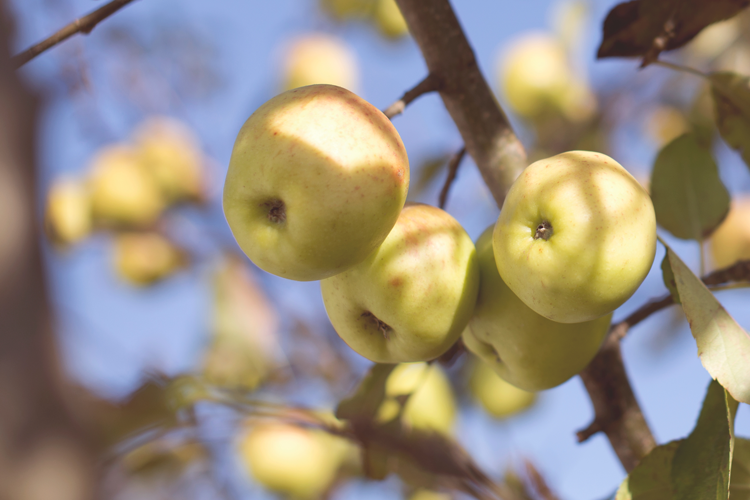 The newest treat at Irene’s Kitchen at Harris Tree Farm is the Mini Apple Cider Donut. Offered alongside their menu of seasonal pies, turnovers, jams and butters, it’s a must-try. But then again, so is everything on the menu! Trust us, no one will judge you if you have one of each (and even if you take a few donuts home with your jar of jam).

Double Crusted Caramel Pecan Glazed Apple Pie — need we say more? The bake shop treats at Mill View Ranch come complete with a handmade craft shop, an enormous pumpkin patch, and some of the best views in Apple Hill. That’s the motto, after all! “Beautiful views for miles. Donuts and pies for smiles!” Share a few donuts with your family and you’ll be smiling, too. 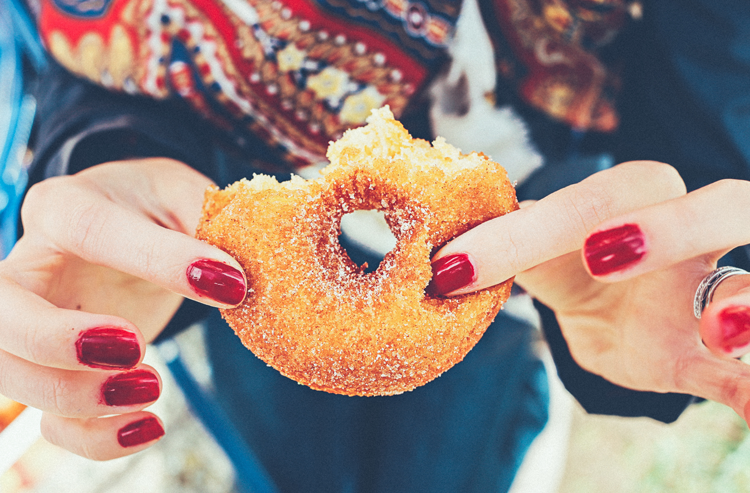 Plain, Cinnamon Sugar, Glazed, Chocolate, Maple, Crumb, Nuts, Sprinkles — High Hill Ranch has an apple donut in every style. Buy a dozen to take home because while you’re at the farm, you need to try the signature Caramel Apple Cider Milkshake! They blend vanilla ice cream with fresh apple cider then pour it into a caramel sauce drizzled cup and top it with whipped cream. You can even combine the treats and top it with a Cinnamon Sugar donut. Yum!

Though this family-run shop produces some of the best fudge, candy-coated apples, truffles, fresh baked hand pies, and caramel corn in the community, they’re more than just a candy shop. All the fruits in their baked goods come directly from the sustainable organic farm on site!

Denver Dan’s lineup of pies and sweet bakery treats has become famous in the Apple Hill community. Lucky for us, you can taste fresh baked pies on the farm and then take frozen, unbaked treats home to keep the Apple Hill Farms fun going all year round!

“Put Honey Bear Ranch on the top of your list of stops when visiting Apple Hill,” says one review on this bake shop’s Facebook page. Honey Bear’s true homestyle pies are called the best in Apple Hill time and time again. Get a slice of the famous Caramel Apple Pie, sip a glass of wine and take in the scenery; you won’t regret it!