The Best Places to Grab a Beer in Sacramento
April 7, 2016

The Best Places to Grab a Beer in Sacramento

When you imagine Sacramento, you might taste the sweet flavor of local wine on your lips. You may not realize that Sacramento also has a ton of places centered around craft beer in addition to its many wineries and vineyards.

From breweries and taprooms to restaurants with large craft beer selections, here are some of our favorite craft beer destinations in the greater Sacramento area.

Visit Bike Dog Brewing Company, West Sacramento’s first brewery and tasting room, for a unique and personalized experience. The four Sacramentans who co-founded this brewery share a love for bikes, dogs and beer — hence the all-inclusive name. Bike Dog Brewing Company operates a three-barrel brewhouse on site that brews small batches, which ensures each glass of beer will always be fresh. This also allows for some exciting new flavors to cycle through, as the brewers have the flexibility to experiment with new recipes. Stop by their tasting room to watch this fascinating process for yourself, and grab a glass to sip on in the meantime!

Just take a look at Blackbird’s two-page menu dedicated to craft beer, and you’ll know you’re at the right place. Their selection includes “SacTown’s Finest” beers, some beers “On the Lighter Side”, several brews that are “All Hopped Up”, and more! Buy a beer flight, featuring four 5-ounce pours from their list of over 50 taps for just $10. Don’t miss their daily happy hour from 4–7 p.m. and every Saturday from 5–7 p.m., when select beers are only $5. 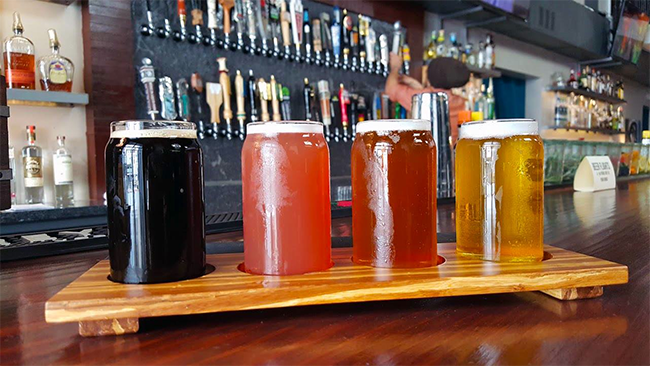 If you’re looking for a one-stop shop for sampling an astounding range of craft beers, Capitol Beer and Tap Room is your solution. They regularly update their draft beers on tap as they purchase their beer one keg at a time. This 20-tap craft beer bar combined with a craft beer bottle shop is worth a visit if you haven’t stopped by already!

As can be inferred from the name, Der Biergarten is the place to go for some wonderful German beer and light German fare. They have 32 beers on draft and sausages brought in from Sacramento’s best German butcher. Der Biergarten has traditional Biergarten tables shipped in from relatives in Germany, which complete the authentic German experience. Keep in mind that this bar is completely outdoors, which allows you to enjoy Sacramento’s sunshine during the day and the peaceful stars and moon at night.

Sacramento’s Device Brewing Company is kid-friendly, dog-friendly and even outside-food-friendly. Does it get much better than that? You’ll often find a food truck parked outside the brewery, but you can’t always guarantee their presence so you are encouraged to pack your own food if you’d like. But on to the brews! They offer several year-round and seasonal beers, and of course they brew their own beer. This is the place to be for craft beer connoisseurs and beginner beer sippers alike!

Grab a local (excuse us, “Lo-Cal”) beer or a “Nor-Cal” beer from the Federalist Public House’s beer garden. Step inside this industrial, clean and wide-open space to sample some of the best brews from all over the region. The Federalist’s picnic table setting makes this a great place to gather with friends, meet new people, and try some wonderful craft beers in the meantime. 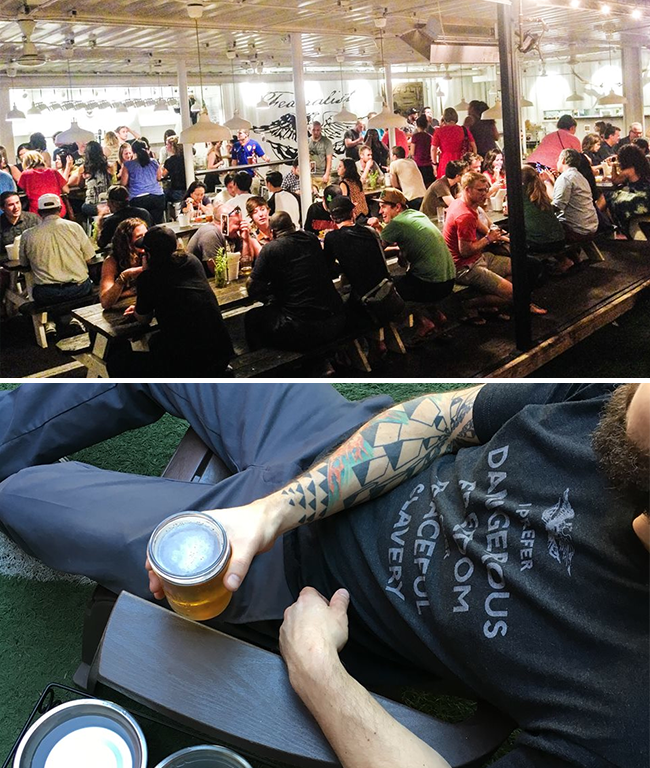 Four avid homebrewers rallied together to open Jackrabbit Brewing just a few years ago. Their goal is “to craft beer that is founded in tradition, but defies convention with California-style inventiveness.” And Jackrabbit Brewing has done just that! Their beers were designed and perfected by their team, and crafted in their five-barrel brewing system (which was also created by them). This DIY team is taking over the West Sacramento neighborhood with their carefully crafted creations.

Low Brau is another German-style establishment that is bringing quality beers (and food) to the Sacramento area. Low Brau has excellent German food, including sausages, salads, soups and sandwiches, and a packed beer menu with tons of German beers you might not be able to pronounce. But you’ll certainly be able to taste their full flavors! 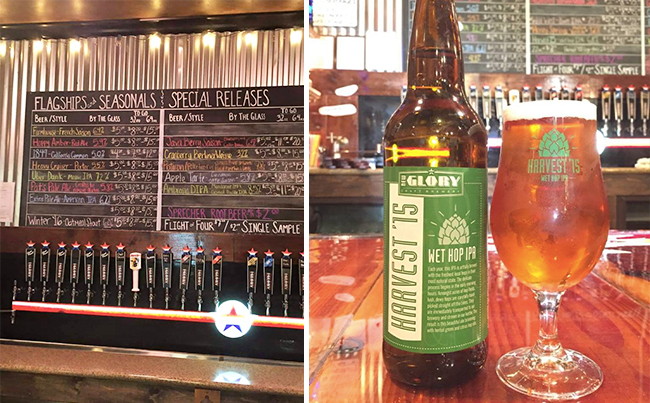 You have a lot of decisions to make when you go to New Helvetia Brewing Company. First of all, you must decide between sitting in their enchanting Courtyard Biergarten or in the comfort of their cozy Tasting Room. And then you must choose your brew of choice from their ever-changing and eclectic beer menu. But what an amazing problem to have! Whatever you choose, you won’t be disappointed.

The story of how Oak Park Brewing Company came about is quite fascinating. Like most breweries, it began with a garage, a few friends, and some curiosity. It evolved into something so much greater, and Oak Park Brewing Company is now a full-on operation in the neighborhood where it all began — Oak Park. Their beers are exceptional, and have earned them all sorts of awards. Stop by for a small plate accompanied by one or two of these beers to see what we mean! 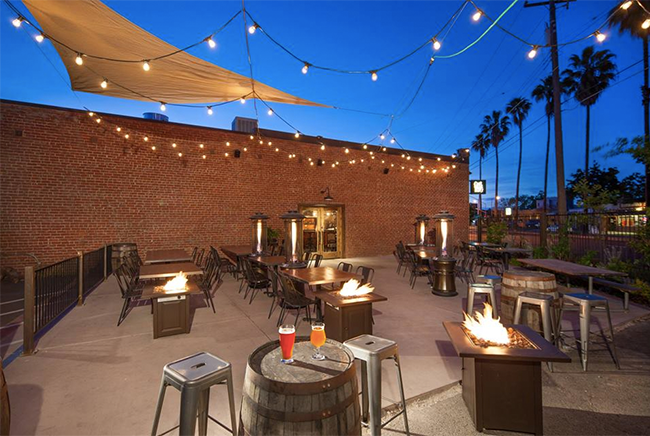 Pangaea Bier Cafe has curated 30 drafts and over 300 bottles in their neighborhood cafe, where they hope to unite the community around their exceptional food and beer selection. Enjoy your brew of choice on their outdoor patio or inside their inviting bar. Make sure you don’t skip over their “Pangaea Burger”, which won the first-place prize in Sacramento’s Burger Battle.

You can visit the Ruhstaller Brewery + Taproom and enjoy one of their brews on-site on an appointment-only basis. Call 916-447-1881 or email brewery@ruhstallerbeer.com to make a reservation. You’ll be glad you did once you sample their handcrafted beers! You can also pick up a pack of their beers at various locations in the Sacramento Region.

You may have sampled Track 7 Brewing Company’s beers at a few locations around town. If so, you’ll know why we’re including them on this list! Check out their year-round and seasonal beers at one of their two taproom locations to get the full Track 7 experience! Keep your eye on their food truck schedule to see what good eats you can pair with your beer.

Yolo Brewing Company is dedicated to promoting a well-rounded lifestyle centered around their craft beers which involves fitness, traveling, music, great food, and more. All of their beers are crafted with all-grain mash, and using only the finest ingredients. So you can rest easy as you select one of their small-batch beers or create a brew of your own, starting with one of 170 recipes. Enjoy a flight of beers at the brewery’s tasting counter, or relax and unwind on their Beer Dock. Wherever you go at Yolo Brewing Company, you’re in good hands! 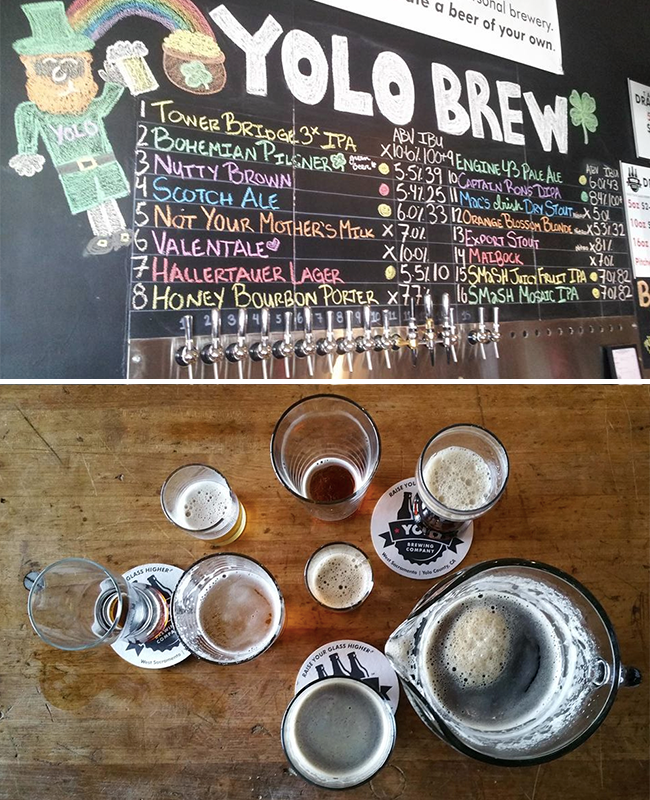 Where is your favorite craft beer destination in town? We’d love to know about it so we might add it to our list!

June 22, 2022 Where to Celebrate the Fourth of July in & Around Sacramento
June 10, 2022 Family-Friendly Golfing in the Sacramento Area