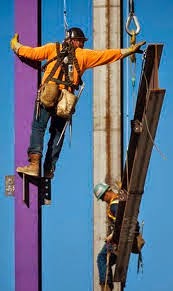 Sacramento’s Entertainment & Sports Center (AKA Downtown Arena) hit another milestone yesterday by “going vertical” for the first time.  The first of many steel beams – appropriately colored purple – was hoisted into place at the area job site.

The King’s Practice and Office Facility is being built right next to the arena and it started with a PURPLE steel beam being hoisted in place – the first of about 9,000 tons of steel being used to build the downtown area.  And did you know this beam will also become the centerpiece of King’s owner Vivek Ranadive’s office?

The new arena’s  foundation is also making steady progress too; here’s a look at the work as of March 9th, 2015.